Currently it’s not the best time to plan new trips (I also wasted my plan to go to Spain & Portugal this spring) but it’s maybe a good time to think about old itineraries. That is the one from July 2018 in Italy. It was pretty hot, and pretty awesome! I think you can see the main character of italy with this itinerary. Because of work I had only 2 weeks, but this is not the perfect duration.

For transfers I used the awesome and not so expensive Italy train network. But be sure to book at least a few days before for the heavily used tracks (like Rome-Naples).

I took a cheap Ryanair Flight (20Euro) from Cluj to Milan. It was so cheap, because Milan Bergamo (little airport about 45km away from city center) is one of the main hubs of Ryanair. But after the not so short transfer, I came to this special city of Milan.

A visit to the Milan Cathedral, the Last Supper of Leonardo da Vinci in Santa Maria delle Grazie and the Castello Sforzesco should not be missed.
If you want to get to know another side of Milan and still quickly get to all the sights in the old town, it is best to stay in the non-tourist Chinatown. For example in the Hotel of the artist Camille, on whose over and over balcony overgrown with plants to the inner courtyard is the most beautiful place for a morning coffee in the otherwise so lively urban jungle. Not far away, by the way, is the Bosco Verticale, a high-rise tower planted with shrubs, bushes and trees that has won a few architecture awards. Milan is developing more and more into a bicycle city. Especially if you want to explore the districts outside the old town, I can only recommend you to rent a bike like we do and to get from A to B like the locals. It’s crazy how many people ride the bike in this not always bike friendly environment.

The whole world knows it the Leaning Tower of Pisa, a real must-see of Italy! To my amazement it is really tilted! But there is much more to see in Pisa

, the city itself is very worth seeing with its yellow houses. Wonderful is also the cathedral Santa Maria Assunta, to him belongs the leaning tower of Pisa, because the tower is only the bell tower which was built later to the church.
Also the Baptistery, the spherical baptistery, is located directly on the Piazza del Duomo. The square is wonderfully maintained and looks almost heavenly.

Besides the beach is not far away, I really needed it (35°C).

In the capital of Italy you will find countless ancient cultural monuments, one more interesting than the next!

Rome is simply incredibly worth seeing. Among the most famous sights are the Colosseum, the Vatican, the Trevi Fountain, the Spanish Steps and the Pantheon. If you like guided tours, you can look here. I myself like to explore by myself. But every now and then guided tours are quite nice, too. I think there are enough guides for this great city. Be sure to stay here at least 3 nights. For the summer it’s really worth to take the train to the beach. They are overcrowded, but it’s also a nice way to see the local life. Yes, Italy is this too and not only pizza and soccer haha.

The city of a thousand alleys and nativity scenes. Apart from pizza, we also owe these fairytale little towns our Punch and Judy from Pulcinella in Naples.But what I liked best was the underworld below the city. On a guided tour (cost 8€ for young people, 10€ for adults) you go a few meters underground.My tip: Don’t drive into the city by car if you have something against dents and scratches. Rather use public transport like train, bus or explore Naples on foot. 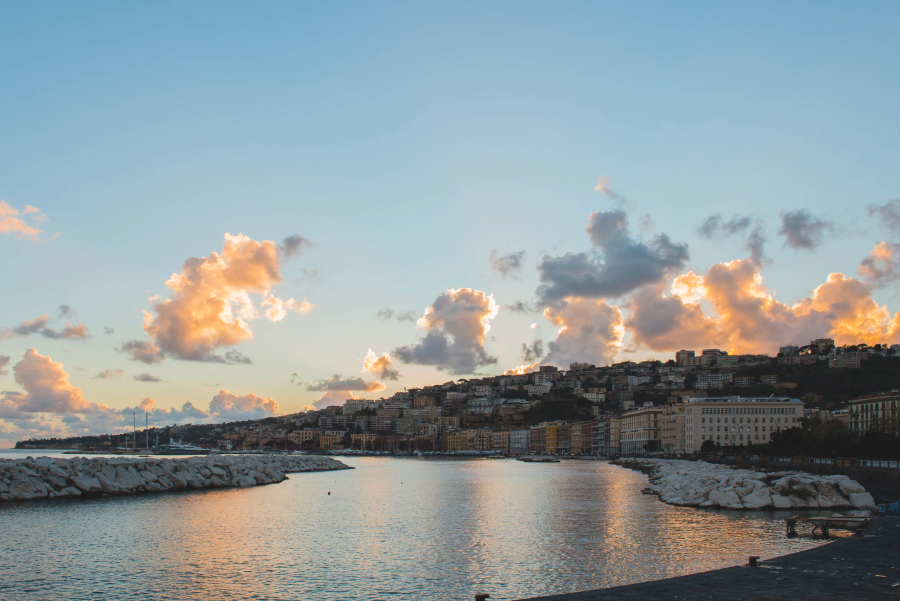 Not far away from Naples is Sorreno. Sorrento is located on the Almai Coast, which is world famous for its wonderful cliffs. The small town offers beaches, streets between high gorges and unforgettable views of the coast.

You can take the ferry from here to Capri which is an awesome island with perfect beaches. But sometimes a little expensive (look at the restaurant menu before and not after entry haha)

If you have time over and it’s not the middle of the summer – take the train to Palermo. It’s the main city of Sicilia.

Away from tourist highlights such as the Norman Palace or the Cathedral, the lively market activity in the Vucciría is particularly suitable for capturing the special atmosphere of this city. To get some peace from the colourful hustle and bustle, the beautiful courtyard garden of the Archaeological Museum is the ideal place. However, with the abundance of destinations in Sicily, there is usually little time to experience the city in its entirety. Directly southwest of Palermo, the famous cathedral of Mont Reale is enthroned high up on a mountain, which should not be missed on any round trip through Sicily. From here it is not far to the picturesque port city of Castellamare del Golfo.

A detour to the seaside resort San Vito Lo Capo is worthwhile, as the path leads through the scenic Riserva Naturale dello Zingaro. Among the cultural highlights in the north-west of Sicily are Segesta, famous for a large antique theatre and an unfinished temple, and the medieval town of Erice, not far from Trapani, which lies high up on a small rocky plateau. Trapani itself is especially beautiful in the evenings and invites you to go window-shopping or to stroll along the long promenade.

So if you like, you can easily travel a lot slower and still have enough to visit. I would suggest 3 weeks for this tour, because the beaches and the food in Italy is awesome.